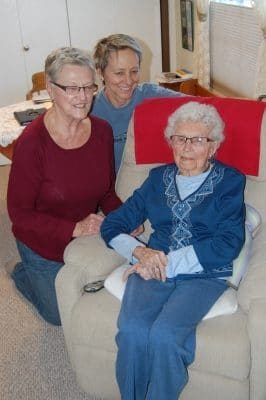 Ask Mary her secret to living to be 109, and she’ll pause for a minute to think about it. Not because she has trouble speaking, it’s just that she’s not really sure the secret to her longevity.

“Well, I had to work, and had good health, good parents and good kids,” she said.

Plus, she didn’t smoke, didn’t drink and didn’t take a lot of medicine, not even aspirin.

Maybe it was her diet. Growing up she ate whatever they grew or raised on the farm in Fayette County, and she didn’t eat a lot of processed foods or fast food, her granddaughter Paige Hunt says. There were the occasional outings to Long John Silvers with friends, but that wasn’t the norm for her.

Certainly, good genes have helped, too. Mary’s mother lived to be 82. One sibling lived to be 99, and another 96. Mary, the second youngest, has outlived all six of her siblings, and her husband, Lawrence, who died in 1963. She surrounds herself with family. David, Peggy and Jimmy all live in Fortville. Mary Helen lives in Madison. She’s also has nine grandchildren, 16 great-grandchildren, nine great-great grandchildren, and another one on the way.

They keep her going and make sure she stays active. Her granddaughter or daughter Peggy are with her every day. They also get help from CICOA, which provides care management and a caregiver who comes over four days a week to help with personal care, and a to play a game or two of cards. That’s kind of an unwritten requirement for the home health aides, Peggy jokes.

Mary plays rummy or euchre just about every day. While she no longer can see well enough to watch TV or do the crosswords like she did when she was 100, Peggy or Paige will copy the word jumble from the paper in letters large enough for her to see, and she unscrambles the letters into words. She also has her iPad to play Seven Little Words. It keeps her busy. She still has chores to do, too.

“When they do laundry, I fold the small pieces. Once in a while I stir up a cake…What kind do we make?”

Peggy reminds her it’s usually German chocolate. During the holidays, they also bake pumpkin bread and pumpkin rolls. For her 109th birthday, Mary had carrot cake, her favorite.

The family did not have a big celebration this year, not like when she turned 100, and more than 200 people were there. But, they did celebrate, and the Town of Fortville acknowledged her as the city’s oldest resident on the town sign. She’s also the longest living member of St. Thomas Catholic Church in Fortville. She’s been a member since the 1930s, and still goes every Saturday evening if the weather is good.

Mary moved to her tidy apartment near downtown Fortville in 1981, after living in Ingalls where she worked 23 years as the head cook at Ingalls Elementary, not far from where she grew up on a farm in Fayette County in Connersville. She still remembers vividly how she hated to collect the eggs as a kid.

“The hens pecked at my hands,” she said.

The family later moved to Milton, which is about half way between Connersville and Richmond. It’s there she met her husband, Lawrence, who visited the farm. Not long after they went on their first date to the movies. They were married in 1928, at her parent’s home.

He was an autobody repairman, and together they built a life and went on adventures. They went to the 1944 World Fair in Chicago, where they ate tamales, rode a sky ride and rickshaw. They survived a wreck when their Model A flipped three times, and the only damage aside from the car was a bobby pin that fell from her hair. They went to California, which Mary didn’t particularly like, because it was so dry. She’s seen Liberace perform and voted in more than 20 presidential elections. She had her photo taken at the voting booth in 2016.

Peggy beams like a proud parent as she listens to her mom talk about her life.

“She has such a good outlook on life,” Peggy says. “She never complains, except, I don’t make her bed right or cook noodles long enough.” Mary nods in agreement.

How’s she lived so long? No one really knows the secret. Mary takes it all in stride, though. Happy to have her family nearby.