Parents Reflect on How CICOA Helped Their "Angel" 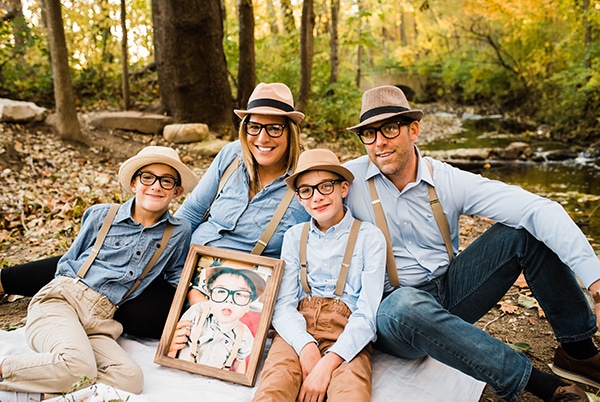 Scott and Mandy Long describe August and September as “their season.” It’s an emotional time of year for them—their son Crew was born in August 2014, and passed away in September 2017. This year, like last year, they had a birthday party and a cake to celebrate his life.

Crew was Scott and Mandy’s third son. They also have an 11-year-old named Charlie and a 9-year-old named Cooper. After Crew was born, Mandy noticed that he had little interest in feeding and seemed lethargic. Nurses soon found that he was a silent aspirator, meaning that food and bacteria could get caught in his vocal folds and lungs without causing a reflexive cough. He eventually was able to go home with a feeding tube, and soon after he was diagnosed with torticollis, in which the neck muscles contract, causing the head to twist to the side.

“It’s so funny looking back because that’s so minor compared to what ended up happening,” Mandy said about the initial diagnosis. “But it got us in the door for care, so that’s all that mattered.”

Caring for a child with special needs

As Crew got older, more health issues became apparent. By the time of his first birthday, he was diagnosed with cortical vision impairment, meaning that he couldn’t see; hypotonia, which meant he had low muscle tone; and microcephaly, which meant he had abnormal brain development. He was on a feeding tube, had scoliosis, and had a severe kind of epilepsy called intractable epilepsy. Crew needed coordinated and full-time care, and this is where CICOA was able to provide some relief.

CICOA provided the Longs with care management as well as respite in the form of an in-home nurse. With Crew’s health being so unpredictable and hard to control, as well as frequent trips to the hospital, it was difficult to find a nurse who felt comfortable caring for him. Eventually the Longs were matched with Kimberly, a former ICU nurse, whom the family still talks about and misses.

“CICOA gave us the confidence to navigate everything better, and they helped lead us through the process,” Scott said. He also pointed out that CICOA played an integral role in getting a cystic fibrosis vest for Crew. Although Crew did not have cystic fibrosis, the issues with his lungs were very similar to that of a child with the disease.

Mandy stressed that the support CICOA gave her as a caregiver was hugely important.

“CICOA helped guide me, because I was lost as a mom,” she said. “I had been a mom before, but never a mom of a child who needed so much care. Crew had so many different things going on, and I didn’t know how to navigate it all.”

Although Crew had to deal with many traumatic health problems at a young age, he was an extremely happy child who was always surrounded by love.

“I think he only cried three times in his entire life,” Scott said. “He didn’t talk, but he was happy as could be most of the time.”

Mandy and Scott agree that Crew has changed their family in unimaginable ways. So when Crew was in hospice and it became clear that he did not have much time left, they brought him home.

“When he passed away, I was on his left side and Scott was on his right side, and we were holding his hands. All three of us were laying in that bed in the moment,” Mandy said. Family members also were there, as well as a priest from their parish. A hospice nurse told Mandy it was one of the most peaceful deaths she had ever seen.

Paying it forward for other families

In Crew’s memory, Scott and Mandy are in the process of establishing “Crew’s Crew,” a foundation that provides fun experiences—like going to the Colts camp for a day or horse riding lessons—for children who have lost a sibling. Aside from books, Mandy said that she did not find much programming or support available for their two oldest sons after Crew passed away, and she wanted to change that.

One of the foundation’s first projects was delivering toys to Peyton Manning Children’s Hospital for the children who were in the hospital and their siblings to play with when they visited. On Crew’s birthday last year, the Longs were able to collect enough toys to fill two cars.

As they reflect on the last five years, the Longs are thankful for the enormous support they have received from their friends, family, doctors, and from CICOA. Throughout all the challenges they faced as a family caring for a child with special needs, Scott and Mandy said they were never alone.

Give more parents and caregivers the peace they need as they navigate their loved one’s care. Give to CICOA today.