Board Member Reflects on Caring for a Grandmother With Dementia 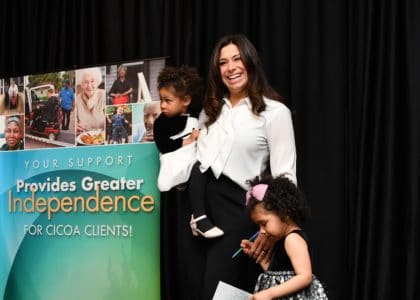 When Brianna Saunders was 24, she took on the role of primary caregiver for her grandmother Evelyn, who suffered from Alzheimer’s disease. Brianna cared for Evelyn for the last 10 years of Evelyn’s life. Although Brianna did not know about CICOA at the time, today she is a passionate member of the CICOA Board of Directors, a donor, and volunteer. She has first-hand experience with caregiving for a loved one with dementia. She also knows how important it is to have help and support along the way.

Learning to Care for a Relative with Dementia

Brianna is the Community Relations Manager at Indianapolis Power & Light Company, where she was encouraged to join CICOA’s board. But her experiences with caregiving began in her early 20s, when her grandmother Evelyn had a stroke and immediately began showing symptoms of vascular dementia.

“I noticed that she was forgetting things a lot, and she got lost once while going to get her hair done. I could tell how badly it shook her up, and that scared me,” Brianna said.

Evelyn soon started forgetting how to do everyday tasks, such as grocery shopping or cooking. She also stopped showering regularly. At this time, Brianna began assuming the role of caregiver.

The Importance of Accepting Help

As Evelyn reached the later stages of dementia, caregiving became an even more strenuous job. Brianna spent nights at Evelyn’s house and helped her with daily tasks, such as turning on the television, eating and taking her medications. She eventually got guardianship over Evelyn’s health, but she knew she could not do it all on her own. She asked her mother–who was living in Los Angeles at the time–to move back and help, which she did.

“We have this mentality, especially as women, that we are responsible for our family. We don’t look at it as caretaking, we just look at it like, ‘My mom is sick, so I have to help her out.’ And it can be difficult, and it can be emotional. You have to be there for them, but you also need to accept help. And if you’re exhausted and tired and broken-down, they feel it.”

CICOA is for Everyone

“Being a caretaker taught me patience; it taught me to be more humble. It taught me how to communicate, by learning to get on her level,” Brianna said.

It also helped educate Brianna about dementia and available community resources. She is eager to connect others with CICOA because she knows how much CICOA’s services would have helped her earlier while she was caring for her grandmother.

“Chances are, there is going to be a point in your life when you need CICOA,” she said. “There are so many people that it supports.”

For more information about how CICOA’s services can help those living with dementia and their family caregivers, contact the Aging & Disability Resource Center at (317) 803-6131.