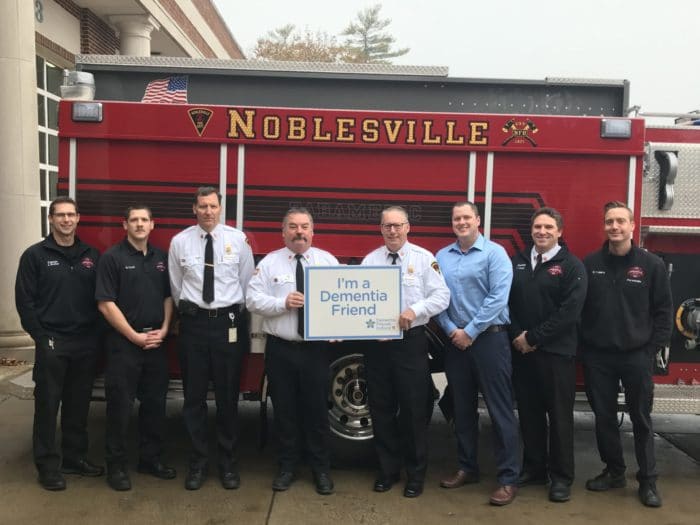 First responders around Indiana, including firefighters, emergency medical technicians and police officers, are learning how to identify someone who may have dementia. They’re learning how body language, maintaining eye contact and even the tone of their voice can help calm someone with dementia, especially in an emergency.

The first-of-its kind training in the state is thanks to a partnership between the Indiana Department of Homeland Security (IDHS), Dementia Friends Indiana and CICOA Aging & In-Home Solutions.

The need for dementia awareness among emergency responders

“As more and more seniors are living with dementia and more are aging in place, we find we’re interacting more frequently with people who have dementia,” said Dr. Michael Kaufmann, State EMS Medical Director for Indiana.

People with dementia can become easily agitated or even combative, especially during a crisis. They can appear confused and not be able to answer questions. However, understanding dementia signs, such as it may take someone with dementia 20 seconds to be able to process a question, helps first responders better communicate and care for those with dementia.

“With awareness they (first responders) may be able to recognize the symptoms and take a different tactic,” Kaufmann said.

The Carmel Fire Department – where Kaufmann is also the local EMS medical director – was the first in the state to make Dementia Friends training mandatory. Noblesville recently also mandated its department take the online course and also has become partners with Dementia Friends Indiana.

Kaufmann would like fire and police departments to take the training one step further and begin talking about dementia at safety fairs and other community events. When communities better understand dementia, it creates a higher quality-of-life for those living with the disease.

Noblesville Fire Department has been working the last couple of years with the Shepherd’s Center of Hamilton County to improve care among the elderly population. When the Shepherd’s Center suggested the Dementia Friends Indiana training, Fire Chief Greg Wyant jumped at the chance to bring the program to his department of about 135 firefighters and EMTs. They completed the training Nov. 1.

One of the most challenging things for a first responder is to identify what’s going on, Wyant said.

“There are so many things that can affect a person’s cognitive ability. For example, have they taken the wrong medication? But if the person says they have dementia, then it helps us help them,” he said.

Working together for the health & safety of Hoosiers

Kaufmann and Wyant both praise the work CICOA is doing to collaborate with first responders and community organizations to increase the understanding of dementia through the Dementia Friends Indiana program.

There’s no one better than first responders to help promote the Dementia Friends movement, said Dustin Ziegler, who heads up the initiative for CICOA.

“When they understand the signs and symptoms of people with dementia, they are able to minimize safety risks that otherwise are more likely to occur if they don’t have this training. Plus, it makes first responders’ jobs a little bit easier by reducing some of the challenges they face and may not have fully understood before the training.”

About Dementia Friends Indiana
The Dementia Friends Indiana initiative is part of the Dementia Friendly America campaign to make communities more informed, safe and respectful for those living with Alzheimer’s disease and other forms of dementia and to reduce the social isolation it can cause. Part of a global movement that began in 2012 in the United Kingdom, the U.S. campaign is led by the National Association of Area Agencies on Aging (n4a), of which CICOA is a member. The focus of the campaign is to foster dementia friendly communities and register dementia friends nationwide. To learn more or to become a dementia friend, visit www.dementiafriendsindiana.org.